ScriptStudio is a tool for scripts development for FIFA Manager 07-14.

A Universal Converter Project Scripting Syntax is used in ScriptStudio for scripts developing. 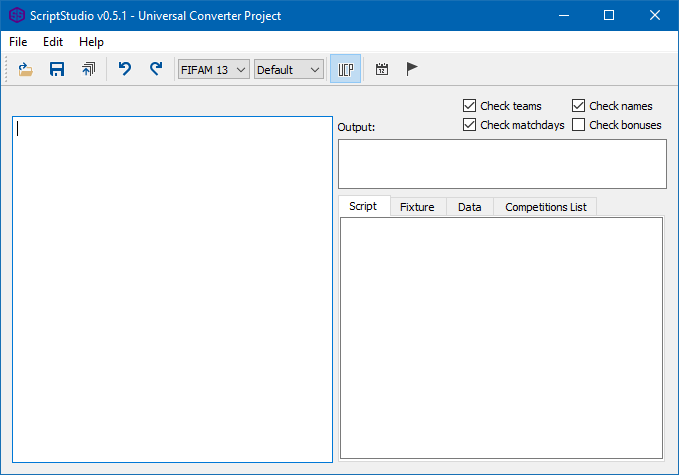 The Source editor is placed on the left side; that's a window where the code is written.

Compiler options contain few options to determine which errors should be shown/skipped.

Check teams - will display errors if there are competitions without teams (empty competitions).

Check names - will display errors if there are competitions without name.

Check matchdays - will display errors if there are competitions without matchdays.

Check bonuses - will display errors if there are competitions without bonuses (prize money) set.

The Error window is placed right under compiler options, it's a place where errors are displayed.

The Output window is placed under the Error window, it's a place where output (compiled code) is shown. It's possible to select and copy text from this window (it may be used as an alternative for "Compile To..." option).

There are 4 tabs in this window:

Script - The main compiled code. This code can be saved with "Compile To..." option or copied/pasted manually.

Fixture - CountryFixture file content. This code can be saved with "Compile To..." option (the second file) or copied/pasted manually. Used only for domestic competitions.

Data - A part of CountryData text, can be copied and pasted to CountryData file. Used only for domestic competitions. 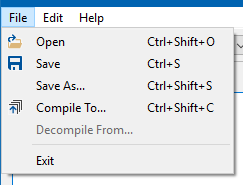 Open - opens a source file. ScriptStudio source files normally have .ucpsc (UCP Script) extension. If you use this command when some unsaved script is opened - you will get a warning dialog which asks you if want to save the previous script. Ctrl+Shift+O combination can be used as well.

Save - saves a source file. When using first time (for a script which was not saved before) - it will ask you to select a folder where the script must be saved, and the script file name. Ctrl+S combination can be used as well.

Save As... - save a source file and choose the folder where the script must be saved, and the script file name. Ctrl+Shift+S combination can be used as well.

Compile To... - compiles current script and saves it to selected folder/file name. When you create a script for domestic competitions, the dialog for file saving will appear twice - first for CountryScript file, and the second for CountryFixture file. Ctrl+Shift+C combination can be used as well.

Decompile From... - not implemented currently.

Exit - closes the program. If you use this command when some unsaved script is opened - you will get a warning dialog which asks you if want to save the script.

Undo - un-do the last operation. Ctrl+Z combination can be used as well.

Redo - re-do the last operation. Ctrl+Shift+Z combination can be used as well.

Select All - select all source code. Ctrl+A combination can be used as well.

About - shows a message box with information about current program version.

Some of Toolbar buttons repeat already presented options: Open, Save, Compile To... and Undo/Redo.

This is a Game version. Any game from FM 07 and up to FM 14 can be selected. There are some differences between each game version, some of them use features which do not work on other versions. FM 13 and FM 14 modes are identical.

This is a Compiling mode. There are 2 modes: Default and Universal. This mode is actual if you write a script for an older FM version (FM07 - FM12) and it determines how scripting instructions will be translated to these older versions.

For example, the getNationalTeam (GET NATIONAL TEAM) instruction is not supported in FM07. If you use this instruction in Default mode, you will get an error:

But in Universal mode, the compiler will translate the getNationalTeam (GET NATIONAL TEAM) instruction to GET NAT SOUTH AMERICA instruction, which can be used in FM07 and works the same way as GET_NATIONAL_TEAM.

This is a UCP Patch Mode trigger. It must be used when you create scripts for UCP Patch. It makes difference only when game version is set to FM13 or FM14. When this mode is enabled, the compiler will treat country IDs differently, since in the UCP Patch, Kosovo and New Caledonia countries were added. This trigger is enabled by default. 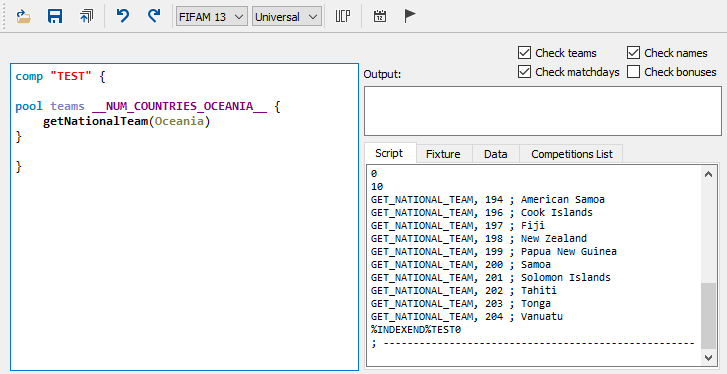 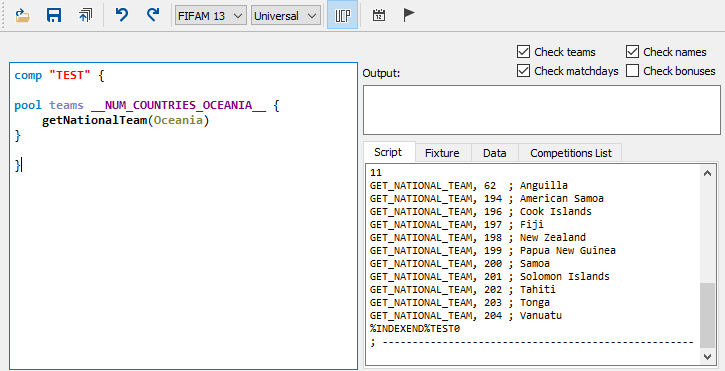 This is a Calendar helper. Not implemented currently.

This is a Flag calculator. It may be used to calculate special flags for leagues - transferflags, loanflags and otherflags. 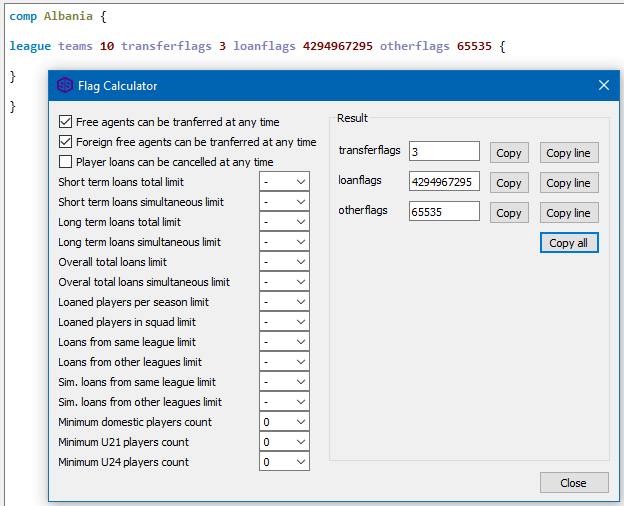